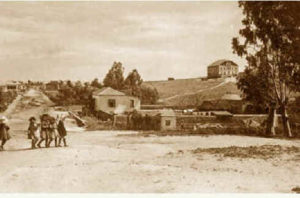 Photo by Leo Kahan, a photographer sent to Palestine by the Viennese Yiddishe Zeitung newspaper in 1912.

On March 6, 1890 (5650 according to the Jewish calendar or Taran, for short) a group of Jews from Warsaw founded the city of Rehovot. The Menuchala V’Nachala Society raised funds in order to purchase land in Palestine. The first crops were grapes and just after the turn of the century they started growing citrus fruits.

The original moshava was bounded by what is today Yaakov on the south, Menucha V’Nachala on the east, Binyamin on the north, and Herzl on the wSest. A structure was built where the original bell was situated in 1891.

The first house in Rehovot was built on what is today Rechov Yaakov. It is called Beit Yosefson and was built in 1890.

One of the founders of Rehovot was Aaron Eisenberg. In 1896 he was the proud father of a son. To mark the occassion of his first-born child, he planted a tree. This tree was the first tree planted in Rehovot. The Ficus tree stands tall today on Rechov Yaakov, towering above the nearby shops, a living testimony to a man who helped build a city.

There are a few things that are left over from the period of the British Mandate in Palestine. Besides the police station that was built on Rechov Herzl just north of Rechov Weizmann, there is an old British style mailbox that sits at the corner of Achad Ha’am and Yaakov. The mailbox (like the police station) is still in use today. 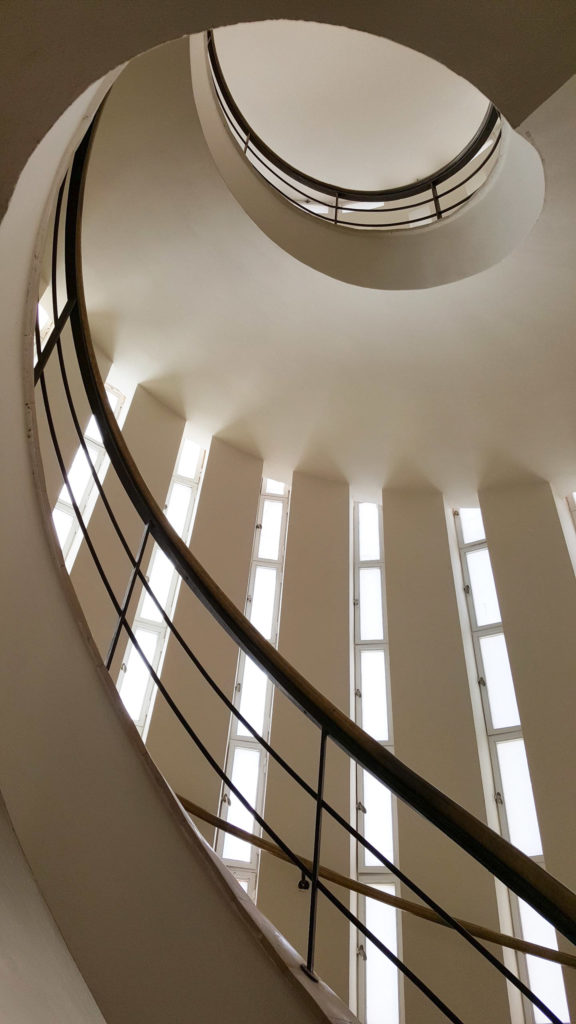 In 1934 Chaim Weizmann, who was then living in England, asked Mendelsohn to plan his house in Israel— after hearing of Mendelsohn’s project for Salman Schocken’s house in Jerusalem. The design process was extensive and created a complicated relationship between Weizmann and Mendelsohn. Weizmann required a modest house, and when asked about the cost, Mendelsohn bid £20,000, which was nearly twice the amount Weizmann was ready to invest. The two corresponded for several months, with Mendelsohn trying to convince Weizmann that building the house according to his designs was a good decision, the costs were not to be spent on luxury, rather they would benefit the personal and official requirements of the Weizmanns. This correspondence continued until August 1935, when the two agreed on the program after long negotiation especially with regards to the price. The building of the house took about a year, and the Weizmanns were able to take residence in January 1937. The final sum after negotiations and construction was £14,832. Though this house was designed for the Weizmanns, they lived there after the Second World War, several years after it was ready for them. When the Weizmanns were not home the house was lived in by visiting world leaders, luminaries, and guests. After the house was completed some difficulties between the architect and clients continued: Chaim Weizmann was displeased with Mendelsohn over imperfections in the building such as dampness in the winter, and Vera Weizmann chose her own interior decoration over that of Mendelsohn. The house now displays the art and objects that the Weizmanns had collected.

The design of the house was met with praise early on. One guest, the niece of Arthur Balfour described it as “a modern, aristocratic house, in harmony with its surroundings, well suited to its purpose, fully expressing the soul of its owners, and, like them, a national treasure.” Beginning in 1949 until Chaim Weizmann’s death three years later, the years Weizmann served as President of Israel, the house functioned as the official residence of the President.

The house was designed in keeping with the international style though many aspects distinguish it from the style as a characteristic and original work of Erich Mendelsohn. Situated on 11 acres (45,000 m2) of land, it was designed to be 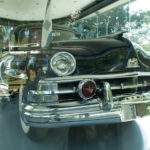 becoming of its site, climate, and landscape. From the top of a hill, the house has a commanding view of the coastal plain, a primary consideration in planning of the house. The structure is symmetrical, which is not common for its style. The form of the structure is simple and is designed to exacting proportions, which are highlighted by the use of clean forms. The structure is organized around a cylindrical stairwell, half facing the courtyard of the house with a pool in its center. Although courtyards enclosed on four sides are an architectural typology, in this case the front facade of the house blurs the boundary between the interior of the house, and the natural environment, both because of this openness to the landscape and the open space above through the roofing.

Mendelsohn designed a number of buildings in Israel in addition to the Weizmann house, including several buildings at the Sieff Institute which would later become the Weizmann Institute of Science, the Schocken house and library, Mount Scopus Hadassah Hospital, the first building for the Rambam Hospital, and the Anglo-Palestine Bank building, now the Bank Leumi in Jerusalem.