For religious schools you have three “levels”: mamlakhti dati, mamlakhti dati torani (“noam”) or haredi (aguda, beis yaakov, habad, kretshneff, plus probably a lot more I don’t know about). We are schizophrenic, and our two boys (3rd and 5th grade) are in mamlachti dati, our 1st grade daughter is in noam, and our nursery-age daughter is in an aguda gan (where we have now had kids for 5 years in a row). The difference between the schools at the elementary school level is mostly just a matter of the balance between kodesh and hol. I find the torani curriculum in the mamad our sons are at quite adequate, and the school (called Tahkemoni, there is another local mamad called Maalot Meshulam) has the pluses of a large Anglo contingent, which means there is an English for English speakers program, and also a strong science program. The minuses are that there are quite a few kids from less “frum” families, and also there is a large Ethiopian contingent; of course, I am happy that the school agreed to take in Ethiopian kids, but the scale is just a little too much. Maalot Meshulam does not have these problems (it’s in a frummer area), but neither does it have the Anglo population. Both mamadim are mixed, while the more right schools are not.

There are a number of schools to choose from for children of all ages and religious backgrounds. We send one of our children to Tachkemoni, which is the regular Mamlachti Dati school. My daughter has 30 kids in her class and there is one teacher and an assistant. We were surprised when we were told that each child has to bring a roll of toilet paper to class the 1st week of school for the classes “stash” because the school does not provide toilet paper in the washrooms. It turns out this is pretty standard in schools across Israel. My daughter has an English language chug after school twice a week and when they reach higher grades they are pulled out of class when the other kids learn English so they can be taught at a higher level. 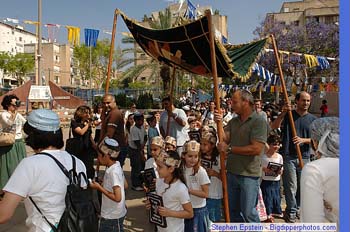 Kita Aleph students at Tachkemoni receive their first Chumash at a Mesibat Chumash in Rehovot.

Friends of ours who spent a year in the USA after having their kids in the chug told us that their kids were able to go into regular schools and their English was on par with the American kids.

I recall seeing a Nefesh B’Nefesh advertisement in a Jewish newspaper before making Aliyah. It read: “We wanted to give our kids a great Jewish education, so we sent them to public school…in Israel.” I don’t know if the schools in Israel are great but I know that they are reasonably priced (not totally free) and more advanced in some subjects than North American schools.

After you have your Teudat Zehut (identity card) showing your address in Rehovot you can register your children for the public school system through the city. They might allow registration after seeing proof of residence such as a lease or deed to an apartment. The number to the department of education is: 08 939-2403.
During the year of Kitah Aleph kids go through various milestones that mark their year. After they have mastered reading Hebrew they have a Mesibat Siddur. The kids prepare for weeks, learning songs and dance routines to help them make the event a memorable one. Our daughter’s class started their Mesibat Siddur at the school. They performed their songs and dances and then the kids, together with parents, got on buses and were taken to Jerusalem. There the kids attended a program and heard a lecture at the building where Rav Kook used to live. Afterwards we all proceeded to the Kotel for the most important part of the day. The kids all lined up and their teachers presented each of them with a siddur. They then went to the kotel to say tefillot.

The Mesibat Chumash, also a very moving occassion happens at the end of the school year. The children were taken to a Beit Knesset and heard a dvar Torah from Rav Simcha HaKohen Kook, the chief Rabbi of Rehovot. Afterwards they walked with a chupa back to school where they were greeted by the entire student body and faculty. They all danced and sang in the schoolyard. Afterwards they were treated to a special demonstration of a Sofer who showed them how Torahs are written. These moments are priceless and one of the many reasons we made aliyah.

While in the past, class sizes were very large, the new entering classes (including present 1st and 2nd grades in 2007) contain just 26-29 kids per class. Also, parents privately pay for a part-time assistant in the 1st and 2nd grades, which collectively gives a great teacher (and/or assistant): child ratio.

Netivot Moshe has grades from 1 to 6 and each year an additional grade is added. The school will stop at grade 8. The school’s philosophy encourages basic Jewish values such as honoring parents and teachers.

By Rachel Mazor
Maon Oz David is a small religious school located in Kiryat Moshe, Rehovot. Run by Rav Cohen with warm and friendly teachers. It’s geared to both the non-religious and charedi community, (help from the state? I don’t know yet the correct wording, I guess it means they are public to everyone, and you can get a discount if the mother is working/if the parents made Aliyah you get a huge discount)
The Rabbi’s wife does the cooking on site, they use strictly kosher Badatz, dairy and soy nutritious and wholesome food.
They have special teacher coming in for music and gymboree. They run from Sun-Thurs. 7am-4pm, Fri 7am-12pm all year, with Jewish holidays, Shabbat and Yom Hatzmaut they are closed. They can be reached at 08-946-0614

By Rachel Mazor
My son will be attending Gan “Ben Ish Chayil” near the Kretshnif area. It’s a Gan for ages 3-5, on Rachov Chish. It’s across the street from the Rabbi Hagon Kretshnif house. It’s geared towards the Charedi religous community, 90% are Sephardi while 10% are Anglo/Ethiopian/Ashknazi. Cost of Gan for age 3, costs drop waaaay down. They operate 7am – 1pm. Since they do not serve breakfast or lunch, the parents who need extra time arrange a van to drop the kids off at aftercare. They do aftercare, which is run by me at home from 1pm-5pm for a extra fee.
Registration for the Gan is at the School, On Rachov Menashe Kapara during school times. The School as of right now is Kita Alef – Vav. The school and Gan is running into their third year of operation. The Rabbi is Rav Chalibi (something like that), has it’s own way of running things and his way of thinking that he thinks and knows for the new generation of charedi children and you can see the difference.